Bob Wallace is CEO of Wallace Properties, Inc., which he founded in 1977. He also heads up numerous corporate and partnership entities involved in commercial real estate investment, development, management and brokerage. He remains actively involved in the management of commercial properties for his own and others’ portfolios.  Wallace has served as chairman of a number of important regional endeavors, such as the Puget Sound Air Transportation Commission, the Seattle Metropolitan Chamber of Commerce, Major League Baseball PFD (TMobile Park), Meydenbauer Center and more.   In 2013, Bob and his wife, Joan were inducted into the NAIOP Hall of Fame, which recognizes the people who laid the groundwork for the industry today and have helped shape the character of our region.

Bob is a Business Administration graduate of Seattle Pacific University and is past Chairman of the Washington State Commercial Association of Realtors.  In 2018, he completed terms on the boards of PREMERA Blue Cross, Puget Sound Bank, Bellevue Chamber of Commerce and Bloodworks Northwest (formerly Puget Sound Blood Center).

He has been married to Joan for 54 years, has two grown children, five wonderful grandchildren and an absolutely incorrigible dog named Lucy. 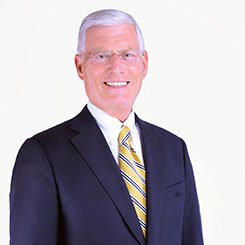 Seattle King County Board of Realtors

Bellevue Chamber of Commerce, Past Chair

"Put your trust in the Wallace Properties team to handle any situation, small or large, in the most honest and efficient way possible. They won't disappoint."